When Christmas Presents Come Together 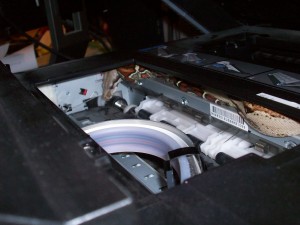 I woke up from my nap and Aaron told me we had a problem….He said that Arya really liked my printer.

Brew for the Men In Red 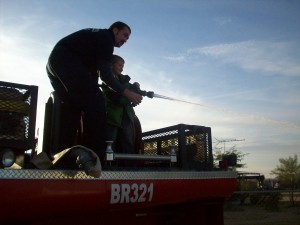 Xavier on "The Beast"

On Saturday morning we took some whole bean coffee from Thousand Hills to the Buckeye Fire Department.  I wanted to thank them for taking me to the hospital in October.  I wasn’t grateful for being in the hospital, but I was very thankful that they were there to take me there and at least start the ball rolling in trying to figure out what is wrong with me now.

When we got to the fire house they were in return grateful for the coffee and asked if X wanted to see any of the trucks.  So he wanted to see “The Beast.”  James, the firefighter, let him get in the cab and start her up, play with the radio and all the buttons.  Then James turned the generator on the back so X could use the hose.  X was really excited that he got to water a very dry desert bush.

It’s Off To School He Goes….

Today was Xavier’s first day of Kindergarten.  He was very excited to be going, I was a little sad to see my little boy to be growing up.  I didn’t cry, but I did get teary eyed.

X said that he enjoyed his first day, he got to be the weather man and he had PE.  What more could you ask for?  His teacher, Miss Bates, is really nice.  But he isn’t quite sure about this whole 5 days week thing.

Xavier went to his first VBS this year at our friends’ church.  X said that he didn’t want to do at first that it didn’t sound like much fun but he would go just because Hannah was there.  Hannah is X’s favorite girl.  Once he the first night of VBS was finished and we picked him up he said that, “VBS was much better than he expected it to be.”  He is such an old man in a 5 year old’s body.

The last night of VBS they invited the parents to join them for a BBQ and then follow the kids for the rest of the VBS and at the end it was time for the kids to sing the songs they had learned durning the week.  Xavier was so excited each night to go and spend time playing games, doing crafts, and learning new things about the Bible.

Aaron had a conference in San Francisco this weekend, so as his trusty side kick I got to go. WordCamp was all day Saturday and they had a Developer Day on Sunday. We flew on Friday morning which was fun. It was supposed to be a non-stop flight to SF, then it got changed to a touch down in San Diego. When we got to SD they said that our flight would be delayed three hours but that they had made arrangements for us all to change planes if we hurried to gate six and then we should be on time to SF. So much for a non-stop flight to SF.

We did arrive in SF on time which was nice because we took advantage of the whole afternoon. We found a place that offered a 4 hour tour of The City. In the tour we got to see all the major sites you would normally get to see and then our guide also took us to see some of the great houses of the area. That was a highlight for me, Aaron on the other hand thought that it was all the same. I love the Victorian nature of all the houses and that the more you restore the house the more you really see how beautiful it was in its youth. We also went through all the normal neighborhoods like China Town, Little Italy, and the 60’s Era (that was interesting).

While on the tour bus I noticed a bus poster for Spam-A-Lot the play. (The Broadway Musical that I have been wanting to see for years.) Aaron used his nifty knowledge of the Internet and his wifi phone and got us VERY nice seats for that night. YEAH! So after our tour and dinner at L’Ottavo (Thanks, Beth!). We went to see Spam-A-Lot! The play was awesome. It however was not for the morally faint. As with Monty Python nothing is off limits, they’re British.

While Aaron was at his first day of his geek fest, I spent my time shopping. I was enjoying my time in the 5 story Macy’s, the 3 story Old Navy, and a slue of other great shops. I did over do it though because I had to spend Sunday in the hotel because my legs we too sore to move.

Saturday night there was a WordPress 6Year Anniversary Party. That was Fun. Talk about a range of people. There was a 16 year old kid there was unable to really function that looked like he would get stuck in a locker a lot, a he/she in a goth outfit with a cape and dog collar, a guy named Neil that was about 45 that probably still lived in his mom’s basement that would just not get the hint and don’t forget the guy who brought his dog in his man bag. Don’t get me wrong there were a lot of “normal” geeks there but they just don’t stand out when there is a whole room full of them.

Sunday night we went to Ghirardelli Square. We took a cab from our hotel, little did we know that we were riding with the stereo typical cabbie. He was either always on the accelerator or the brake. Once we arrived there unharmed, we found out the square was closed. The restaurant and the gift shop was the only thing left open. And if that wasn’t enough I had also left my camera in the hotel room. At least the food and the view was amazing.

Well, to sum up my thoughts on The City…..I was enjoyed it but I was disenchanted with the thought of it. I had always wanted to go and see what it had to offer but when I got there it seemed as though I had seen most of this before. The shops were the same, the night life ended early and the ocean was better in SD. In the end, so far, I like Boston in the fall.

This Ain’t Build A Bear!

Posted by Christen Campbell on May 26, 2009
Posted in: Uncategorized. Tagged: Photo, Xavier. 3 comments

We took Xavier to a newer place called RIDEMAKERZ. They describe it as Build-A-Bear but for boys. The advantage of this place is you can go back any time and get add-ons or upgrades for your car or truck. Like if X gets tired of having a tow truck he can go back and get a dump truck add-on to slide on in place of the boom.

X had a hay day in there building his very own RC tow truck. We took Papa Honey with us too so he could join in the fun. We did have to talk Xavier out of gold rims for his tow truck. Not quite sure a 5 year old should be pimping his ride so soon.

Posted by Christen Campbell on May 26, 2009
Posted in: Uncategorized. Tagged: Phoenix, Photo, Xavier. Leave a Comment

I just want to take a little blog space to remind all of you that these boys know how to ROCK!

Posted by Christen Campbell on May 18, 2009
Posted in: Uncategorized. Tagged: Photo, Xavier. 2 comments

Yesterday, we went to our friend’s house to go swimming. Xavier has done a great job at learning to swim. He is a very messy swimmer. He is getting quite good. X says he is practicing to swim in the lake by Mama Julie.

Today, Xavier finish his first 100 piece puzzle. It was a Transformer puzzle. He said that it was a BLAST!
(X dictated this post)

March 21, 2009
We gave Xavier the choice of staying in OK an extra day and having no detours on the way home or we could leave on Friday…he choose to stay. But that doesn’t mean that we nothing happened on our home. We did try to stop at two Rte 66 museums and a honey farm on Saturday but they were all closed. We broke our trip back home into two days so we stopped in Albuquerque for the first night.

March 22, 2009
We had a lovely breakfast from the hotel and then went back to the room for church. It was a great message from Dave Ramsey. After we packed we got on the road, little did we know that it would be like the God was doing yard work. The wind on this trip home was blowing so hard that were hitting tumble weeds like there was no other. It was as though God has turned on his weed blower for the medians and they were cleaning out everything. We were driving in sure high winds that we saw a dining room set whipped out of a truck and slam on the ground in splitters. We also saw motorcycles riding at about a 40 degree angle trying to stay upright on the road. We were just on the south side of the Flagstaff a piece of luggage flew out of a truck and we had no other choice but to hit it.

We tried to find something for Xavier to see while we driving home still. We saw a sign that said petrified wood and a dinosaur museum. Once we got there it had to the most disgusting single wide trailer with an add on that had anamatronic dinosaurs with manikins on them. Needless to say the road trip home was not has much fun for X as it was interesting for Aaron and I. 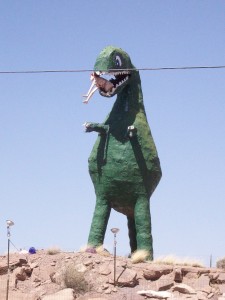 Where The Wind Comes Sweeping Down The Plain

We have been enjoying our time in OK. We have been doing all the normal things like shooting turtles in the pond, riding quads, reading over 400 pages, “hiking”, and other crazy things.

Xavier has been outside about 95% of the time. If he is awake we can’t keep him in. He is usually dirt from head to toe. He has been enjoying quads rides with anyone he can convince to take him. We went “hiking” the other day to see some caves and springs. Dave told us that there would be a great cave that had a natural spring coming out of it and you could get to it from the from the trail on the Gator. Little did I know that we have go down a small hill, cross a creek, up the other side, down the other side to cross the ravine and viola we were there. At this point Dave was not my favorite father-in-law. Along the way back to the Gator we all got pretty muddy and Aaron and I each lost a shoe.

For St. Patrick’s Day Stacie bought X a bag of green toys. One of the toys was a whoopee cushion. He made a go of everyone sitting on it, even Great Grandma! Later that day he realized that he could make the dog sit so he got Ninja to sit on the cushion. The dog’s face was priceless. I so wish that I had it on camera.

As for the other crazy things….DANIEL and Aaron took culverts to the top of the hill and rolled the down in them to the bottom of the field, not once but thrice.