Where The Wind Comes Sweeping Down The Plain

We have been enjoying our time in OK. We have been doing all the normal things like shooting turtles in the pond, riding quads, reading over 400 pages, “hiking”, and other crazy things.

Xavier has been outside about 95% of the time. If he is awake we can’t keep him in. He is usually dirt from head to toe. He has been enjoying quads rides with anyone he can convince to take him. We went “hiking” the other day to see some caves and springs. Dave told us that there would be a great cave that had a natural spring coming out of it and you could get to it from the from the trail on the Gator. Little did I know that we have go down a small hill, cross a creek, up the other side, down the other side to cross the ravine and viola we were there. At this point Dave was not my favorite father-in-law. Along the way back to the Gator we all got pretty muddy and Aaron and I each lost a shoe.

For St. Patrick’s Day Stacie bought X a bag of green toys. One of the toys was a whoopee cushion. He made a go of everyone sitting on it, even Great Grandma! Later that day he realized that he could make the dog sit so he got Ninja to sit on the cushion. The dog’s face was priceless. I so wish that I had it on camera.

As for the other crazy things….DANIEL and Aaron took culverts to the top of the hill and rolled the down in them to the bottom of the field, not once but thrice.

March 12, 2009
Aaron, X, and I start off on our road trip to end up in Oklahoma. We decided that we would take time getting there and have fun as a family. Our first destination would be White Sands, NM. I had thought that I had done my research and White Sands would be right there on our way. Come to find out later that night it was an hour an fifteen minutes out of the way. Who knew?

March 13, 2009
We have a tradition on vacation that we try to eat at places we don’t have at home. So we set off to in the direction that we thought the White Sands sledding park was in for a great place to eat. We find a little hole in the wall to eat at and a very nice local that explains that we headed in the wrong direction.

After we had ate breakfast, we drove to the White Sands National Park. Where they charged us an arm and a leg for three sledding discs. We then entered the park and drove to find some “naked” dunes. Once we found the perfect dune, we had some fun. I couldn’t be left out of the fun so I did the “bunny hill” a couple of times and the “big boy” hill once. However, Aaron and X did both, mostly the big hill, for about 2 hours. We had sand coming out of everything.

From there we decide to detour to Roswell, NM. When we found out that it would only add half an hour to our drive Aaron and I couldn’t pass it up. We love the sci-fi stuff. We didn’t stay long, but did take the time to do the UFO Museum and have Xavier take a picture with R.A.L.F. (Roswell’s Alien Life Form) their mascot. On our way to Roswell we stopped by a pistachio farm/vineyard. We acquired some very fun food items like a Pistachio Wine, Huckleberry Honey, Pistachio Coffee, Pistachio Honey and a Pomegranate Wine. It was an altogether great stop.

On we went to Amarillo, TX, where we would stay for the night. But the trip wouldn’t be boring. Xavier got to see his first snow fall. The temperature had dropped from 56 to 32 real quick. It snowed from an hour outside of Roswell to about half an hour outside of the Oklahoma/Texas line. In all it was about 4″. Being that the last time X was in snow he was about 2, he was having a ball. 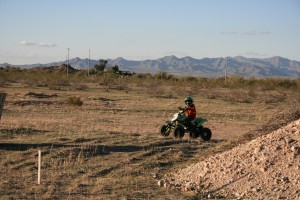 Xavier was so thrilled that he was able to ride his quad last weekend. He always has so much fun zooming around our property. He is getting quite good at turning and using the brakes to come into “camp”. I can’t believe how much bigger he looks on it this year. He is becoming such a little man. He calls his quad his “baby,” I think that he is spending too much time in the garage with Papa. 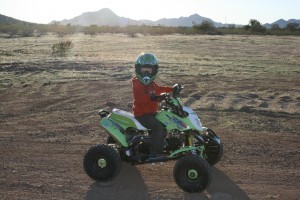 X Having Too Much Fun 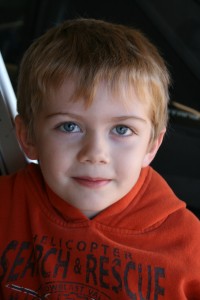 After A Good Day of Quad Fun

If you know me at all you will know that I like my space to organized and clutter free.

We have steadily out grown our house that we have been in for about 4 1/2 years, so we thought that a little extra space would be helpful while we are waiting for the right house to come along. So we started out our Christmas vacation by building a shed. By we I mean, Aaron, Dad and Cody. Occasionally Mom, Rachel, and I would hold up a wall, sweep, etc. They had the shed finished by New Year’s weekend, which isn’t too bad for guys who had no clue what they were doing. They did a great job and I now have 120 sq feet of space to put Acholi Beads, which used to live in my living room, Christmas and Fall decor, and misc nonsense that we are keeping until we move.

Don’t think I wasn’t busy during this time the boys were building. I took this time to completely “gut” Xavier’s room. I took out all of his toys and went through them and got rid of so many that I think that we could of started a toy store. Then I went and got a ClosetMaid Cube, fabric buckets, and plastic tubs and sorted. I think he is now the most organized 5 year old in town, maybe even in Arizona. I went a little crazy.

And that’s not all, I have now, simultaneously started to reorganize the kitchen and the office. Who knows what’s next? I think that I have taken this New Year’s resolution thing a little far or maybe the meds the doctor has me on are just making it so I have many more better days. 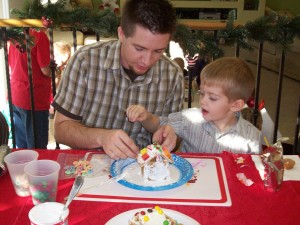 Today was Xavier’s preschool Christmas party. Aaron and I both had the chance to go with him which was so much fun. There where so many kids there it was chaotic. Nikki put me in charge of the Gingerbread House station. I think I will be dreaming of frosting for the next couple of weeks.

The kids got to build houses, make ornaments, color a gingerbread man, listen to the Polar Express, have a Christmas inspired memory game, and to top it off they had a book exchange. I think all of the kids went home on a sugar and adrenaline high.

Today my baby turned 5. I can’t believe that he is already a big kid. I never expected to have such a sweet, well verbed, yet totally off the wall son. He keeps us going at all times, what should I have expected Aaron is his father. I just wanted you all to know how much I loved my Xavier and wanted to wish him Happy Birthday! 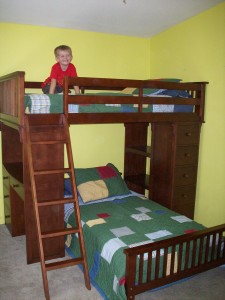 Xavier’s bunk bed finally got delivered today! He is so excited. His new bed has his own desk, eight drawers, and a book shelf. He says that he will be ready to do his paperwork in no time. He was really excited that he was able to pick out the blankets and sheets for the beds. He says he can’t wait until he can have his friends stay over in his new extra bed. 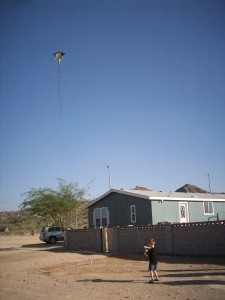 Today we had a break from the heat, it was awesome. Our house is located near some small mountains, so we get some pretty good winds going every couple of days. Today was a perfect day to fly.

Xavier said “You thinkin’ what I am thinkin’?”

I don’t blame him for wanting to take part in this most glorious day. Being coupe up in the house because of heat for the last three can’t be any fun for a hyper-fun four year old. He spent most of his day outside. He went to a car show with Papa Honey and he had a bubble party with Mama Julie. Today was quite well round for the first cool day. Tomorrow….the quad! 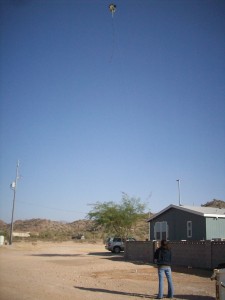 I just wanted to let you all know that we adults were not left out of the fun kite flying. Rachel had the chance to fly a kite for the first time and she didn’t even crash it! We are so proud of her, she is growing up so fast. 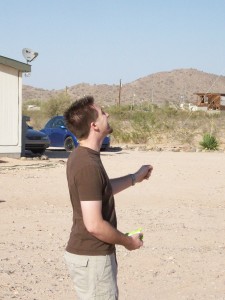 Aaron Getting in Some Kite Flying Action

Aaron also got to fly some too. He was getting jealous that he couldn’t find his kite but Xavier was kind enough to let him borrow his for a while. 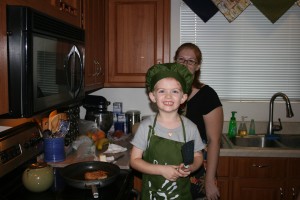 X’s loves to help in the kitchen, it doesn’t matter what I am making. For being only four he know his way around. He was pretty excited the other night ’cause I let him be in charge of flipping the french toast and putting on the pan to go into the oven. He did a great job. He did most of the flipping by himself and only needed a little help. He did a great job making sure that toast didn’t touch in the pan and I think he only burnt two pieces. Not bad for a first timer! 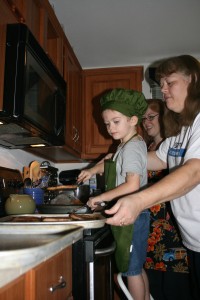 Mimi to the Rescue! 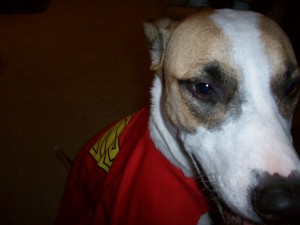 Last night Xavier had Rachel help put his Superman cape on Maybe. Xavier and Maybe proceed to run around the house as super heroes. Maybe did quiet well as a side kick, she came when ever she was needed. Xavier would yell “Super Mimi’s on the way!” Maybe was close behind.

(Just so you all know the dog’s name IS Maybe, but Xavier says that is to hard for a little dog to bark. So Xavier has called her Mimi since the day we brought her home. Hey as long as the dog comes when she is called I am good.)